The COVID-19 pandemic has brought with it a wave of scams, with no signs of slowing down. These scams have also produced a surge of counterfeit bills into circulation. Using cutting-edge technology, scammers create bills that look just like the real thing to the untrained eye. Unfortunately, once counterfeit bills are passed, their new owner can become liable for passing them on to someone else.

In an effort to combat the reach of counterfeit bills, the Secret Service and the U.S. Treasury have added several identifying features to legitimate dollar bills to help citizens and business owners determine whether they are authentic. Here are some signs that can tell you if a bill is the real thing:

A hologram of the face image on the bill: When held up to the light, the hologram on the bill should match the face on the front of the bill. Scammers will often bleach a lower denomination bill and try to pass it off as a bill of a higher denomination—but they can’t change the interior hologram. So, if the $100 bill is really a counterfeit bill created from a $5 one, holding the bill up to the light will reveal the face of Abraham Lincoln, and not Benjamin Franklin, who appears on authentic $100s.

A thin vertical strip of text spelling out the bill’s denomination: Holding the note up to the light will also display this sign of authenticity on genuine bills.

Color-shifting ink: All new-series bills, except for the $5 bill, were designed with this trick: If you tilt the bill back and forth, the numeral in the lower right hand corner will shift from green to black and back to green again.

Watermark: The watermark of the bill can be seen in an unprinted space to the right of the portrait when the bill is held up to the light.

Microprinting: For yet another sign of a bill’s authenticity, you can look for tiny microprinting on the bill’s security thread, which spells out its denomination in all-caps text.

Fine line printing patterns: Look for very fine lines behind the portrait and on the other side of the bill as well.

What to do if you’ve been passed a counterfeit bill

If a note you’ve been passed does not hold up to the authenticity test, and you believe it’s a counterfeit bill, the U.S. Treasury advises the following course of action:

Counterfeit cash can be harder to spot than you think. If you think you’ve been passed a counterfeit bill, and the note is missing the signs listed above, be sure to follow the advice of the U.S. Treasury. 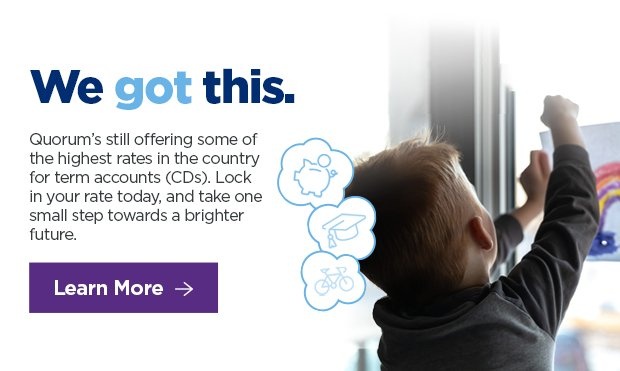 Quorum's still offering some of the highest rates in the country for term accounts (CDs). Lock in your rate today, and take one small step towards a brighter future.

Scammers Gonna Scam: The Latest Scams and How to Avoid Them